The 2023 Earlybird membership renewal is now open! You may pay your 2023 dues as follows:
1. e-transfer to the office email at rclrenfrew@cogeco.net;
2, online at www.legion.ca;
3.  Payment in the Lounge, during business hours; or
4, you may drop off your payment (in a sealed envelope with your name and address) into the locked mailbox to the left of the main entry doors.

If you have not yet paid your 2021 or 2022 membership fees, please do so at your earliest convenience so you remain as a current member.

Upcoming Entertainment at the Renfrew Legion!

The Renfrew Legion has a number of upcoming Dart Tournaments! 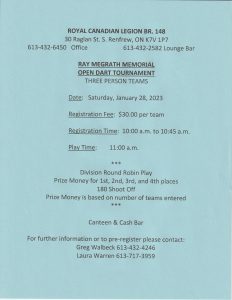 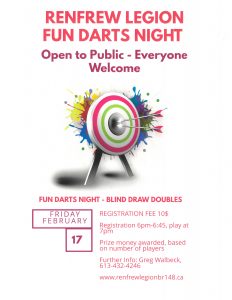 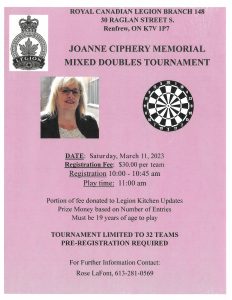 The mission of our Legion is to serve veterans, including military & RCMP members and their families; to promote Remembrance, and to serve our communities and our country.

We are hosting a Musical Variety night in the Lounge, on Friday, January 6 from 7-10pm. Free admission, with all musical skill levels welcome. For further information, please call Lawson Smith, at 613-323-5987.
Read More

Give us a call 613-432-6450, send us an email info@renfrewlegionbr148.ca  or simply drop by the Legion at 30 Raglan Street South to learn more about our services and how we are supporting our Veterans, their families and our communty.